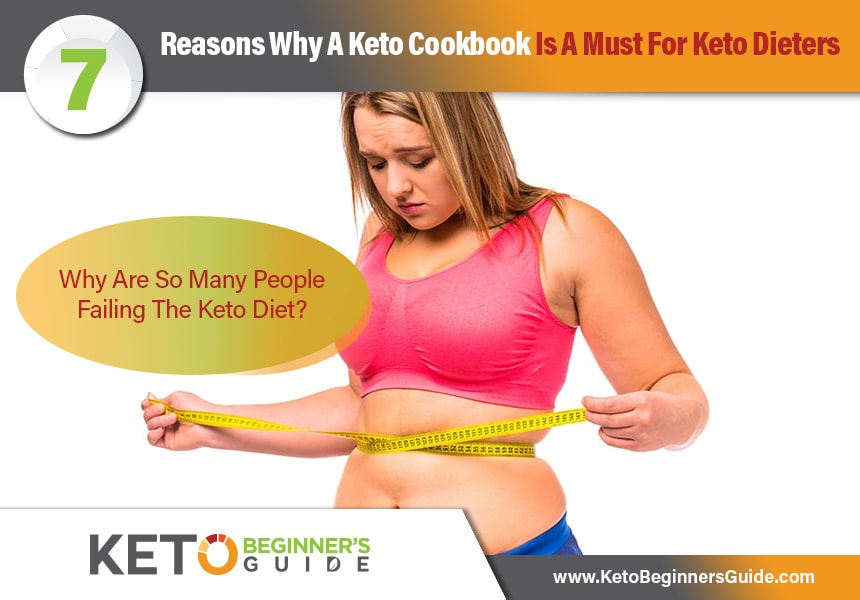 Why Are So Many People Failing The Keto Diet?

People have told you that the keto diet is about willpower. You might have even been told this about all diets. What they didn't tell you is that whether you succeed or fail on the keto diet has a lot less to do with willpower than a lot of us think. It's really about what toolkit you arm yourself with before you even start. And if your tools suck, so will your experience.

So when we say you need a cookbook that you can rely on to get you through the worst parts of the keto diet (because who wants to do any meal planning on the fly when they're carb-deprived, irritable, and exhausted?), we don't mean a fancy book to sit on display on your coffee table. We mean a cookbook specifically made with ketogenic dishes that you actually want to make. Here's a list of 7 reasons why having a good cookbook on your side will help you maintain your sanity while starting the keto diet.

1You'll Have Variety In Your Meal Planning

You're probably worried that the cost of losing weight on the keto diet will be that all of your meals are boring and gross. This is a valid concern if you just start throwing together low-carb items that happen to already be in your kitchen. Even if you do have low-carb staples you enjoy, how soon will it be before you start hating eating them all the time? We're willing to bet that it's not very long.

A recipe book is going to have a wide variety of options for you to try and probably introduce you to food options you'd never considered before. You'll end up trying dishes you never would have before the keto diet. As you gain a more robust understanding of what you like, you'll begin to collect favorites, which will then help you decide what kind of books to move onto in the future.

2It'll Add Simplicity To Your Evenings

Meal planning was annoying enough when you were eating everything in sight, right? Sure, people say they're going to get into meal planning and prep all the time, but how often does that work out? The truth is that meal planning on the keto diet is even more nightmarish if you don't get organized. So get a ketogenic cookbook and plan your entire week's worth of dinners out all at once!

A cookbook will take the stress out of dinnertime and free you of the responsibility of having to come home from work and plan a nutritious meal when your brain's already fried. It'll make getting from meal to meal so effortless because you'll know what's going to be on the table and when. The best way to do this, of course, is to get a meal planner. How else are you going to keep up with all that information throughout the week?

3It Provides Structure You Can Rely On

By now, you've probably realized that if you're going to be planning your meals in bulk, it might be best to shop for them that way, too. This is another way that a cookbook will add structure and routine to your life. You can't cook what isn't in your house, right? Time to pick a grocery day! While some of us may still have to go out multiple times a week to shop due to limited refrigerator space or other issues, imagine how much easier it'll be to ignore all the tempting things just waiting for you to slip up in the grocery store when you know exactly what you're there for.

4Your Wallet Will Thank You

An added benefit to having your cookbook is that you'll save money you would have otherwise spent splurging. This is especially true if you're the type to order out to eat when you feel stuck on what to eat for dinner. Even if you order something healthy, which means it probably isn't going to be cheap, you've still got to pay delivery fees, taxes, and tip for your driver.

All of this adds up pretty quickly, and it's even worse if you have to eat out multiple times a week because you're disorganized. We all understand, coming home from work, you must be tired; still, you have a choice. You can spend half an hour preparing a meal you'll enjoy with ingredients you already purchased earlier in the week (one that will probably feed you multiple times, especially if you're cooking for one). Or you can settle for wasting money night after night ordering food you probably won't even have leftovers from. If you like saving money, is it really all that much of a choice?

5You'll Feel Way More Confident About What You're Eating

Unless you're an incredibly trusting person, you've probably been suspicious at some point or another about what's in your food while you were sitting in a restaurant or getting fast food. You're right to have had that bad feeling—the foods we love to eat are chock full of preservatives just to get to us, and it only gets worse from there. Restaurants are infamous for serving huge portions, as well as menu items full of dishes with shockingly high sodium and sugar levels. That's before you even get to where their ingredients are from. You have no control over whether the food you're consuming is non-GMO, cruelty-free, or even free of dangerous pesticides!

Are you really going to research every single thing you're considering on the menu, or are you hypnotized by the photos in the menu the second you sit down? Cooking for yourself removes you from this entire dilemma. You can select the foods you want and prioritize your needs and ethical concerns, whether they be organic, gluten-free, or free-range and grass-fed. Not only will it be a weight off your shoulders to be in control, but the chances are that your body will soon start to feel better, too.

The keto diet is far from impossible if you go in well-equipped. Human beings are a lot more adaptable than we seem. We can change our entire lives around and form brand new habits in three weeks if we're just consistent! If you follow our advice and get your hands on a trusty cookbook, once you have all the previous points going for you, there will be so much less standing in your way of succeeding on the keto diet, and maybe on some days, it'll feel like a joke.

In the beginning, as your body begins its first protest at all the carbs you're depriving it of, it'll feel like that joke is on you. This is normal, and it happens to everybody. (To learn how you can minimize the effects of keto flu, aka the "sickness" that a person's body goes through when they're starting the keto diet, click here.) Once you've made the adjustment, the routine your cookbook provides and encourages will make it easier to stick to the keto diet without cheating, which leads us to the best point of all.

When you get organized with a keto cookbook, you'll be making it easier for you to maximize your diet while minimizing temptation. This means that you're going to see the results you want sooner rather than later. The water weight will go sooner, followed by the first of those stubborn pounds you've been trying to shed for years, and that progress will, in turn, make you more sure of your commitment to seeing more.

The "willpower" and "discipline" everyone told you about was really just relaxing into a routine. When you're used to passing on the catered lunch at work in favor of your tasty leftovers from the day before or the meal you prepared specially for that afternoon earlier in the morning, it won't feel like a punishment to watch people chow down on pizza while you enjoy sweet treats built to fit into the keto diet. You'll be eating protein-packed meals that will give you the energy to push through the afternoon when everyone else is feeling sluggish after their carb overload.

So empower yourself with the tool that will have a good impact on you day in and day out. A cookbook will provide you with advantages during your keto diet that other people just won't have. There's only so many times you can pester your spouse about ideas for dinner or make last-second trips to the grocery store before the same song and dance becomes tiresome.

It may be that this isn't your first try at dieting or even your first attempt at the keto diet. If you're looking to try again and finally see results, start with one of the simplest yet most helpful tools in any cook's kitchen. But don't overwhelm yourself buying a bunch of keto recipe books at once. Start with one, and once you've decided that you like it, use it to structure your life into the routine that will lead you to success. After that, all you have to do is follow it.