10 Signs That Indicate You Are In Ketosis 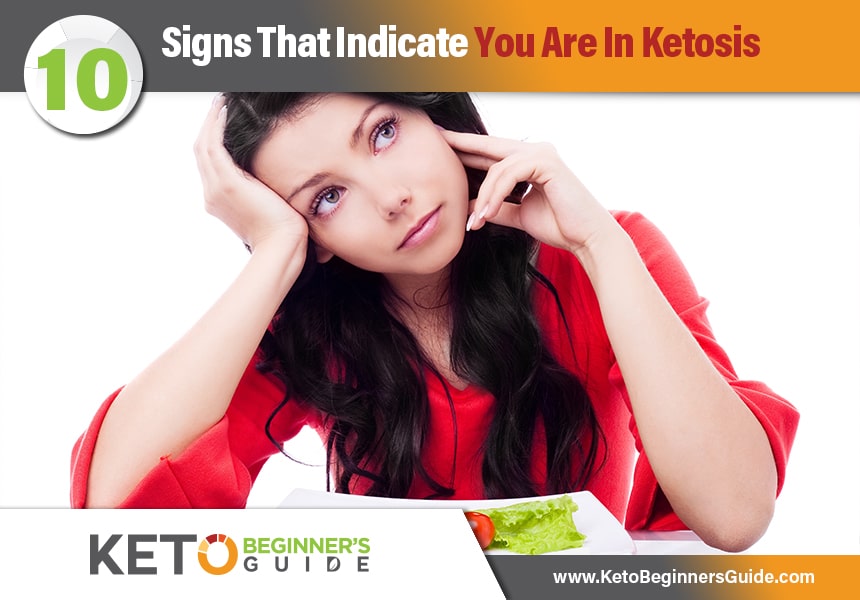 How To Know If You Are In Ketosis

The keto diet is one of the most popular and effective methods of shedding off weight and improving health. The keto diet, which is a low-carb and high-fat diet, will increase your blood ketone levels if followed correctly. The increased ketone levels provide a new source of fuel for your cells and organs, leading to a lot of the unique benefits of this diet.

When you adapt to a ketogenic diet, your body goes through numerous biological changes, including reduced insulin levels and improved fat breakdown. Once this happens, your liver will begin producing large amounts of ketones to provide energy to your brain. However, it is usually quite hard to determine whether or not you are in ketosis. The following are signs you should look out for to know if you are already in ketosis.

1Increased Ketones In The Blood

Reduced blood sugar levels and increased ketone levels are the telltale signs of a ketogenic diet. As you advance into the later stages of a keto diet, your body will begin burning fats and using ketones as the primary source of fuel. Using a specialized meter to measure your ketone levels is the most precise and effective way of knowing if you're in ketosis. The device usually measures the amount of beta-hydroxybutyrate (BHB) in your blood to calculate your ketone levels. BHB is among the primary ketones in the bloodstream.

Some keto diet experts suggest that having blood ketones that range from 0.5-3.0 mmol/L describes the nutritional ketosis. The most accurate way of testing ketosis is to measure the ketone levels in the blood; a majority of research studies use this method. Even so, this method has some downsides: Firstly, it requires pinpricking your finger to draw blood; secondly, the kits needed can be costly. These are the top reasons why many people only perform a single test per week or every other week.

Getting rid of carbs can result in fatigue in the early stages. It can include an initial decline in workout performance. It is mainly a result of reduced glycogen stores in your muscles, which supply the primary and most efficient source of fuel for all kinds of high-intensity exercises. After a few weeks, however, a lot of people on the ketogenic diet report that their performance returns to normal.

In general, a keto diet will require you to make a significant change to the types of foods that you consume. In the early stages, you can experience typical side effects, such as constipation and diarrhea. A few of these complications should dissipate after the transition period; however, it is crucial to be cautious of various foods that might be causing digestive issues.

Ensure that you eat lots of healthy low-carb veggies. Not only are they low in carbs, but they also contain plenty of fiber. One of the biggest mistakes that you can do is failing to diversify your diet. If your food lacks diversity, it may increase the risks of digestive complications and nutrient deficiencies.

One top concern for a lot of people on a keto diet is sleep, particularly when they first switch their diet. Many people complain of insomnia or waking up during the night after they initially reduce their carb intake drastically. This issue gets better, though, after a few weeks of being into the diet.

You need to allow your body to adapt during the early stages of the keto diet. Interrupted sleep and insomnia are amongst the short-term effects of this type of diet because your body is undergoing many changes. The food that you are consuming is providing you with excess energy levels, which is very beneficial in numerous ways, but it can make sleeping a challenge. Many people who take up the ketogenic diet for the long term have reported that their sleep has improved after they have adapted to the keto diet.

What causes the biggest problems for new dieters is the first switch to a keto diet. Its most common side effects include weakness and fatigue. These side effects are the main reason why people quit even before getting into full ketosis and gaining its long-term benefits. These issues are entirely natural. Remember that your body has to adapt to a fat-heavy fuel system after being supported by a carb-heavy system for several decades.

Typically, it takes you 7-30 days to achieve full ketosis. To be able to minimize fatigue during the transition phase, it is wise to take electrolyte supplements. Your body is losing electrolytes due to the drastic reduction in water content and the elimination of processed foods that often have added salt. When taking these supplements, ensure that your body receives 2,000-4,000mg of sodium, 300mg of magnesium, and 1000mg of potassium every day.

Keto diets, like any typical low-carb diets, are very beneficial when it comes to losing weight. You have a high chance of achieving both long-term and short-term weight loss when you adapt to a ketogenic diet, as shown by numerous weight-loss studies. After experiencing the initial sudden decrease in water weight, you should be losing body fat continuously, provided that you stick to the diet and stay calorie deficient.

Quick weight loss often happens when you switch to a keto diet and extremely restrict your carb intake. The maximum restriction of carbohydrates, which is less than 20g of net carbohydrates (carbs minus fiber) per day, allows you to achieve ketosis. Weight loss occurs by eating lower calories than the amount you burn up through physical activity.

Many people complain of bad breath after reaching full ketosis. It is another common side effect. Keto dieters reveal that their breath has a fruity smell to it. It is usually a result of increased levels of ketones. Acetone is the specific cause; it is a ketone that goes out of the body through urine and breath.

Even though this breath may be unpleasant for your social life, it is a positive indication in terms of your diet. A preferable solution is to brush numerous times during the day or use sugar-free gum. In case you are using sugar-free gum or other options such as sugar-free drinks, then you should carefully look at the label for carbs. The presence of carbs might increase your blood sugar levels and reduce your ketones.

8Increased Ketones In The Breath Or Urine

You can use a breath analyzer to measure your blood ketone levels. It checks for acetone, which is one of the three primary ketones that are found in your blood when you are in ketosis. It helps to give you a look at your body's ketone levels, as more acetone exits your body when you achieve nutritional ketosis. Even though breath analyzers are accurate, they are less precise than the blood monitors.

You have to use specific indicator strips to measure ketone presence in your urine daily. These strips also count ketone excretion through your urine and can be a cheap and handy method to evaluate your levels of ketones every day. However, they aren't highly reliable.

People on keto have also complained about brain fog, feeling sick, and tiredness after they take up an extremely low-carb diet. This is commonly referred to as "low-carb flu" or "keto flu." However, those who proceed with the keto diet for the long run usually report improved focus and energy. After you begin a diet that is low on carbs, your body usually begins adapting to using more fat for energy instead of carbs. Once you get into ketosis, a big part of your brain starts to expend ketones instead of glucose, and it can take your body a few days or weeks to get fully adapted to this.

Ketones are a very potent energy source for the brain. Ketone tests have been conducted even in the medical setting as a way to treat brain illnesses and conditions, such as concussion and memory loss. So as expected, long-term keto dieters often state that they experience improved clarity and brain function. When you get rid of carbs, it also helps to control and balance your blood sugar levels.

A lot of people also indicate reduced hunger while on a ketogenic diet. However, the research of the cause is still going on. The suggestion is that the reduced hunger pangs might be due to the increased intake of proteins and vegetables, as well as the alterations of your body's hunger hormones.

Your brain might also be affected by the ketones directly, resulting in a lower appetite. If you wish to lose weight, one of your biggest obstacles is your appetite. Several researchers assumed that the ketosis process is what causes the decreased appetite on the ketogenic diet.

Several crucial signs and symptoms will help you determine whether you are in ketosis. Eventually, by following the guidelines of the keto diet and remaining consistent, you will achieve some kind of ketosis. For a more precise evaluation, perform a weekly check on your ketone levels in your blood, urine, or breath.

Signs of ketosis usually manifest within two weeks after your body starts to go into ketosis. But if you are adhering to the diet guidelines conscientiously, then the signs should go away quickly — this will happen right after your body has adapted to the fat-burning process. If any of the symptoms don't disappear after a few weeks, then you might be eating a lot of carbs.