7 Triggers Of The Keto Rash And How They Cause It 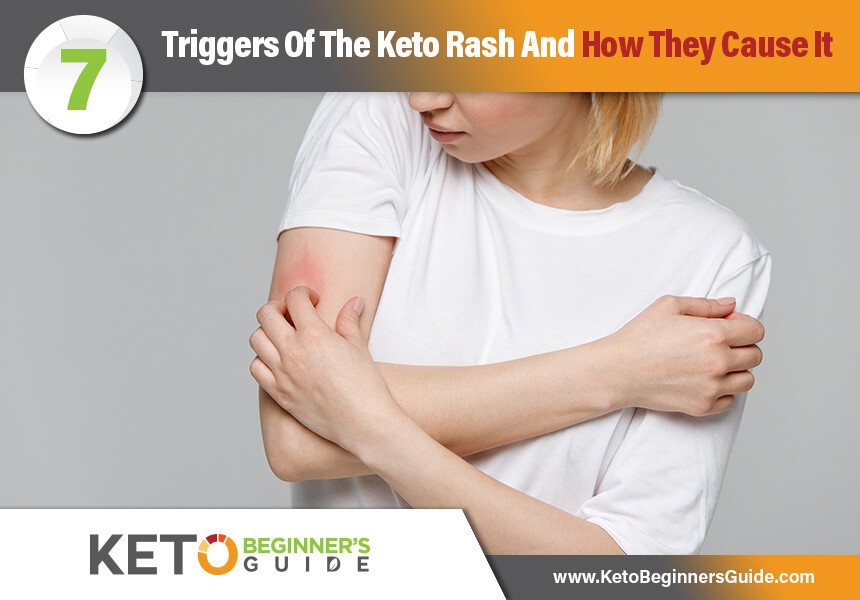 Factors That Trigger A Keto Rash

A skin issue called "keto rash" is similar to appearance as dermatitis or eczema. It is itchy, irritating, and characterized by raised skin bumps ranging in color from pinkish to brown. The rash might be uncomfortable and perhaps even embarrassing; however, it isn't life-threatening. Skin lesions typically characterize the outbreak in its early stages and resemble scratches, with colors varying from light pink to dark brown. The lesions fully develop once sores start filling up with fluid, thus becoming infected.

A keto rash usually appears on the neck, arms, armpits, back, and chest. The rash tends to form symmetrical patterns on the body. In the final phase of the outbreak, it may resemble freckles or dark spots; that's hyperpigmentation, and it can last even after the rash has long disappeared. A keto rash is usually only temporary and heals in a matter of weeks, and a few of those that enter ketosis get this. To learn more about the seven triggers and how they might cause a keto rash, read on.

The human body stores toxins in fat tissues. When you start the ketogenic diet, the body burns through your fat reserves quickly. It results in toxins finding their way into your bloodstream, and they require an exit route.

If you don't have a properly functioning liver, the toxins will most likely expel through sweat. That could be one of the reasons why keto rash occurs around the areas where there's an accumulation of sweat. The root cause of keto rash is not clear yet. That's what makes treating the condition so tricky.

One scientific study established that there's a relationship between fasting and a keto rash. According to the study's results, 50 percent of patients had developed this skin issue. When the sugar levels in the blood were low because of fasting, the patients' bodies entered into the state of ketosis, thus causing the rash.

You need to pay close attention to any potential issues that may arise as you start your keto journey. If you begin to notice symptoms of keto rash or keto flu, you need to increase your carb intake temporarily to ensure that the symptoms don't get worse. If home remedies don't improve your condition, consult a doctor that can provide you with the tools you need to alleviate keto rash.

Candida is one of the naturally occurring yeasts found in the human body. In an average amount, it is fine, but it can cause problems similar to dysbiosis if overgrown. While sugar allows candida to thrive, you might find yourself suffering from what experts call a "candida die-off" during the keto diet. Toxins, coupled with a sudden rise in inflammation, can cause an extreme reaction on the skin.

Avoiding refined sugar and improving your blood sugar control does not necessarily mean having an abnormally low carb intake. Instead, it means finding a carb level you can tolerate well that's lower than what the Food Pyramid recommends but also higher than zero. Safe starches are perfectly fine, particularly those that provide a lot of glucose without too much fructose.

Proper fat digestion requires bile. Itchy skin is the most common sign of poor bile. The most probable reason for this is that the gallbladder and liver find a sudden increase in dietary fat too stressful.

Keto is a high-fat diet, which means that you will require supplements to help the liver process large quantities of fat correctly. One excellent solution for that is choosing bile salts. To avoid deficiencies, you always need to supplement your diet with nutrients (i.e., vitamins, minerals, etc.).

Dysbiosis is an imbalance of bacteria in the gut. It is a situation where unwanted bacteria have grown out of control and have overpopulated the healthy bacteria. It leads to inflammation and toxin production.

The standard American diet seems to feed unwanted bacteria that lead to a state of dysbiosis. This state correlates with skin problems, which include eczema, rosacea, and acne. The keto diet appears to shift the microbiome away from the undesirable bacteria, which causes temporary aggravation of bacteria in the gut.

The function of bile is to digest fats absorbed by the small intestine as well as release toxins processed by the liver. If you ever start the ketogenic diet, it may stimulate a quick release of the congested bile, thus dumping toxins into your digestive tract. Eventually, this would be the most probable cause of the inflammatory skin rash.

People often develop a sluggish flow of bile because of several different factors. If the bile flow ever backs up, it can lead to a concentration of toxins. If you, all of a sudden, adopt a high-fat diet, this may stimulate a quick release of the congested bile, and the effect of that is dumping toxins into the digestive tract. The rapid release of toxins may be a cause of the inflammatory keto rash.

7Ketones That Irritate The Skin

Acetone is one ketone body that could potentially irritate your skin. Your skin might be having adverse reactions to acetone (in particular, the acetone present in your sweat). The itching typically begins soon after people get into ketosis. It usually stops within a day or so, but this only happens if you consume more carbs and exit ketosis.

The body usually produces higher quantities of acetone during the adaptation part of ketosis. Acetone is also the ketone body that triggers the famous keto breath or dragon breath. The excretion of acetone happens through sweat. It makes sense since the keto skin rash almost always appears in areas of the body where there's an accumulation of sweat.

The keto rash looks similar to dermatitis and eczema. It usually shows up on the back, neck, shoulders, chest, armpit areas, torso and may even show up on the face and extremities, although less commonly. Keto rash usually forms a symmetrical pattern on either side of the body in a net-like distribution. The keto rash can become worse just like the vast majority of skin rashes if you work out strenuously or expose the outbreak to friction, moisture, and heat.

If you're experiencing the keto skin rash, here are a few things that you should expect. The best-case scenario is that it disappears on its own after several weeks. The worst-case scenario is that you are one of the few individuals who suffer it each time the body enters a ketosis state. If you are concerned about any of the side effects associated with the keto diet, which include the keto rash, you should visit your doctor for additional information. They may refer you to a dietician that can help you safely transition to the ketogenic diet.