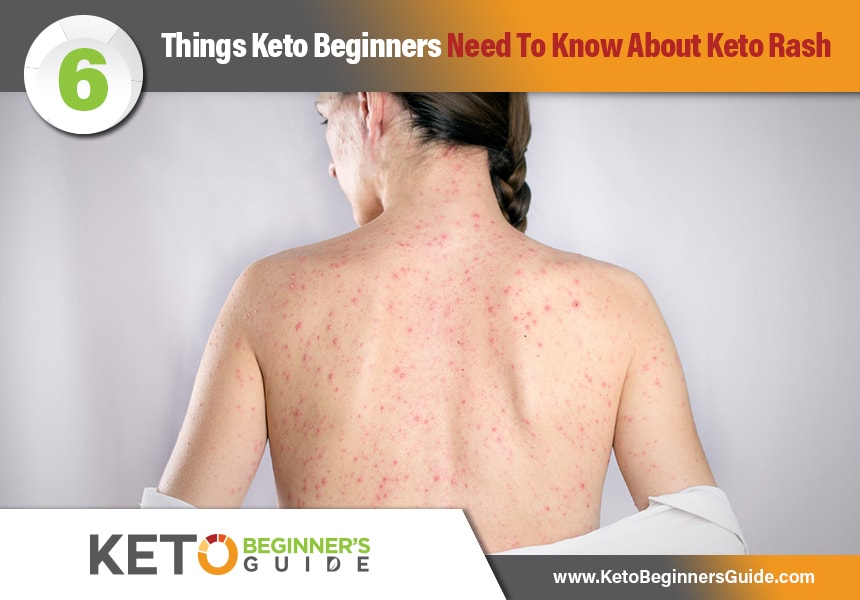 What You Need To Know About Keto Rash

In case you have been keeping up with the latest health and wellness trends, then you are most likely aware of the ketogenic diet, also commonly known as the keto diet — a low-carb, high-fat diet. When you adopt a diet with so little carbohydrate consumption, your body depends on ketones from fat for energy instead of glucose from carbs, and this results in improved fat-burning and weight loss. However, a few people undertaking the low-carb or keto diet have complained of experiencing itching. Even though it is a rare problem, it cannot be pleasant. Also referred to as "keto rash," the itching can get out of control and, at times, can even disrupt sleep.

There's a link established between this acute rash and the increased levels of ketones in the body known as ketosis, and it is how it got the nickname "keto rash." Ketosis tends to happen due to restrictive dieting and also experienced by people with diabetes. The rash and itching are often symmetrical on both sides of the body; the most affected parts include over the chest, armpits, back, and, in some cases, in the neck. Read on to find out six crucial facts that keto beginners should know about the keto rash.

1The Cause Of Keto Rash

The itching begins typically in the early stages of ketosis. However, it ceases within a day or two if people increase their carb intake and exit ketosis. On the other hand, the itching can get worse after exercising or during hot weather.

When you are in ketosis, your sweat contains acetone, which is a ketone body. At high concentrations, acetone can be very irritating. Therefore, the parts of your body where sweat tends to accumulate are usually the most affected by the itch and rash.

2Avoid Sweating As Much As Possible

It is helpful to put on clothing that is comfortable and suitable for the climate. Your main target is to remain as fresh as possible to prevent sweating more than necessary. Ensure optimum air conditioning, if possible.

Taking a shower after exercising, when you're no longer sweating, can be very beneficial. In case the itch gets very irritating, you might consider skipping out your exercise for several days. You can switch up your routine and engage in activities, such as weight training, that doesn't result in perspiration.

3You May Have To Exit Ketosis

If you have tried various options and haven't been successful in minimizing your itching, then the issue can be effectively cured in a day or so by exiting ketosis. You can do this by consuming at least 50 grams of carbs each day. If you still want to gain the majority of the benefits of a keto diet — mainly for weight loss and reversal of Type 2 diabetes — then you should consider a more liberal low-carb diet (50-100 grams of carbs per day) and include intermittent fasting.

One can define a low-carb diet as any diet with carbohydrate intake below 130 grams per day. In general, the lesser the amount of carbs, the more effective it seems to be for weight loss without hunger and Type 2 diabetes reversal. Fasting is simple and described in just a few words: "consuming nothing, including sweeteners or sugars, and drinking water, tea, coffee, or bone broth;" that's all there is to it.

There are various other kinds of treatments for keto rash that you can find online. Such medications are taking antibiotics for weeks or months and using special creams. In the best-case scenario, these treatments will only offer temporary relief.

A high recommendation to cure keto rash is never to use antibiotics. The resulting side effects and risks are far greater than uncertain and temporary benefits. Antihistamines, steroids, and antifungal creams seem to be not effective at all. The only solution that's simple, safe, and free is exiting ketosis.

So, the question is if you can ever use ketosis again after exiting. Fortunately, the answer is yes. If ketosis made you feel great and if you gained many benefits, then you might consider trying it again.

The keto rash may stay away after the first time. Some people only get it once or in the early stages of ketosis when they are first starting on a low-carb diet. After a given period, the body tends to excrete fewer ketones when sweating. Keep in mind that most people in ketosis never get the rash.

Preventing and easing the keto rash can be done through dietary and lifestyle changes. It is also crucial to take care of your skin as much as possible. This is particularly so if you suffer from inflammatory skin conditions.

In case home remedies do not work, you should visit your physician. Your doctor will give you the assistance you need. He will help you clear up your skin issue completely.

Even though experiencing the keto rash is rare, you can avoid it by taking precautions when taking up the keto diet for the first time. Lower your carbs intake; however, instead of rapidly dropping it, attempt to leave out the carbohydrates from your diet gradually. Also, supplement with a multivitamin and mineral at first.

As you begin the keto diet, it is useful to take a multivitamin or multimineral once a day. It helps minimize the possibility of nutrient deficiencies. In case the rash fails to clear up after the home treatments, then it might be crucial to visit your doctor.