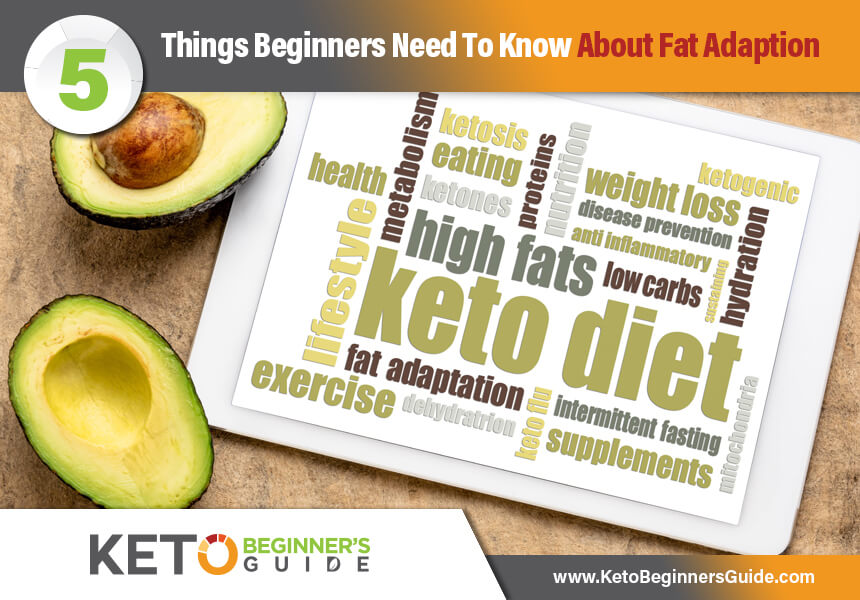 A Beginners Guide To Fat Adaptation

When you first start a keto diet and significantly reduce your intake of carbs, your body starts kicking into high gear to burn away your remaining glycogen and carb stores. Once carbs are no longer an option, your body starts to tap into its excess fat stores to use as energy. In about four weeks or so, your body will become accustomed to living off of fat, or in other words, it will become "fat-adapted."

The process of fat adaptation happens when the body has adapted to using ketones instead of sugar for fuel. You are only fully fat-adapted after your cells have the maximum ability to use ketones. The process isn't merely switching to using fat from sugar; instead, it is a slow process where change occurs on the cellular level.

1It Takes About Three Weeks

It can take as few as three weeks to transition into a fat-burning state. The initial phase of carb withdrawal is the first thing you will experience. You might experience the keto flu during that phase, which may last from three to 14 days. During the first few weeks, your body uses up stored glycogen or glucose and sends signals for replacement.

The second phase can last for six to eight weeks, and it is during that time that your body begins making the transition to burning fat instead of glucose. After sustaining this stage for several weeks, you will then be in maintenance mode. This mode means that your fat-burning state continues as your body keeps on using healthy fats as fuel rather than carbs.

2You Can Be Fat Adapted Without Being In Ketosis

You can be in ketosis without being fat-adapted, and you can become fat-adapted without being in nutritional ketosis. You don’t have to follow a keto diet to reach fat adaptation. Some people choose vegan, primal, or paleo diets or try intermittent fasting to stay in this state — but they are not in ketosis.

3What You Need To Do To Be Fat-Adapted

Slowly begin to reduce your consumption of foods that are high in both sugars and carbs and replace them with high-quality proteins and healthy fats. Whenever you do consume carbs, eat those foods that contain lots of dietary fiber. Nourish yourself with high-quality protein from eggs, seafood, and grass-fed meat and healthy fats from olive oil, avocados, MCT oil, and coconut oil.

When you shift from consuming 100 grams of carbs to suddenly 10, that is very stressful for your body. Instead of abruptly cutting out carbs, which may cause adverse effects that include nausea, brain fog, headaches, and other symptoms referred to as the keto flu, you can try taking a more moderate approach. To ease this time of transition, take things slowly but steadily. Reduce carbs gradually while adding more healthy proteins and fats to make sure you eat enough calories.

4How To Tell If You Are Fat-Adapted

Instead of craving for a snack in about two to three hours after eating a meal, you should be able to last for four to six hours without food. If you are fat-adapted, that would mean you will experience lesser energy slumps. That is because your fat stores are meeting the energy needs of your body.

After you have reached fat adaption, your body will have all the fuel it needs for physical activity and intense training sessions. If you are an endurance athlete who still relies on carbs as your primary workout fuel, then you have not yet adapted. If you've been eating a high-fat, low-carb diet for a long time, then you will want to watch out for these similar signs. These signs indicate that you have become adapted.

Most individuals are not naturally fat-adapted; instead, most people are "sugar burners," which means their bodies use glucose for energy. That is because the traditional Western diet is based heavily on carb-based, processed foods. Carbs play an unfortunate cycle on your body. Whenever the supply drops too low, it will lead you to experience low blood sugar, resulting in symptoms such as a sugar crash, inability to focus, dizziness, carb cravings, and lightheadedness. Your body needs to have more carbs to maintain sustained levels of energy and prevent the adverse side effects.

Your body has to work overtime to combat the glucose surge by sending more insulin out, which is a hormone that helps sugar leave the bloodstream and go into the cells. As a consequence, your insulin levels increase. When insulin levels remain elevated, it is called insulin resistance – this may lead to Type 2 diabetes. When your bloodstream has too much insulin, the chemical signals in your brain get thrown off, including the ones that tell you that you are full. That explains why you repeatedly feel hungry when you are on a high-carb diet and have a tendency to overeat.

Being "fat-adapted" and "in ketosis" are two separate things. When you are in ketosis, that is a state where your body produces ketones. A majority of people can get into ketosis pretty quickly, but to become fat-adapted can take longer.

Fat-adapted, which is also called keto-adapted, refers to a state where your body utilizes fats as its primary fuel source. Human bodies always use a combination of fat and glucose for energy, but for "sugar burners" (where the principal energy source used are carbs), the body first turns to glucose. After you have become fat-adapted, your body does not look for energy from glucose anymore since it knows it can now burn fat instead.