5 Keto Flu Symptoms That Can Peak In The First Week 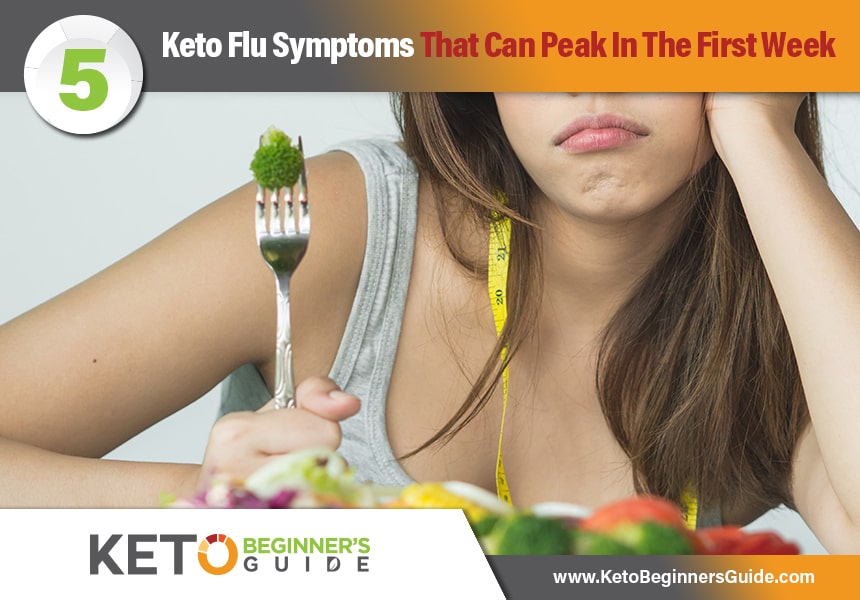 Top Things A Keto Diet Can Bring You

The concept of 'keto flu' is one that revolves around a group of symptoms that many people can wind up experiencing shortly after starting a keto diet. Keto flu symptoms are typically mild and don't last long, ranging from several days to a few weeks. Such symptoms can show up as a person's body gets accustomed to dealing with carb restrictions and going into a state of ketosis. The related symptoms arise from temporary imbalances within the body in terms of minerals, insulin, and energy sources.

Carbohydrates are what the body primarily uses as an energy source. When on a keto diet, the carb intake is lessened from the standard recommendations of 200 to 300g each day down to less than 50g. When the human body isn't getting enough carb intake, then the liver responds by producing glucose for energy by tapping into its reserved stores. This process is known as glucogenesis. In time, the liver won't be capable of producing the necessary level of glucose to maintain the body's energy demands.

Those following a keto diet can suffer from bad breath. When the human body gets to a state of nutritional ketosis, the liver starts producing a specific ketone known as acetone. Acetone gets diffused into the lungs and exits the body with a distinct smell when exhaled.

Even if your dental hygiene is the best in the world, going into a state of ketosis can still leave you with a keto breath. Whereas halitosis or normal bad breath is generally a result of poor oral hygiene, in contrast, the condition of keto breath is a subsequent result of a human body moving from using carbs for energy and turning to fat instead. Even with such symptoms, a keto diet is potentially advantageous for those with neurological diseases like epilepsy or endocrine diseases like obesity or diabetes.

There is one issue that's not common to keto or low-carb diets but can be irritating to anyone going through it, and that is the itching. Itching is also occasionally called 'keto rash,' and it can be disturbing, even to the point of disrupting a person's sleep. The rash and itching are typically nearly symmetrical across both sides of the body. It usually develops over the armpits, back, and chest; it also occasionally impacts the neck.

You can try several things in curing keto rash if you have it. First of all, wear clothing that is comfortable and appropriate for the climate you are in to prevent any unnecessary sweating. Whenever it is proper to do so, make use of air conditioning. It also helps to take a shower after you exercise and have finished sweating. If your itching is troubling you, you might want to forego exercise for several days or do short spurts of weight training so that you don't sweat.

Leg cramps are somewhat common when people start their ketogenic diet. It is considered a classic symptom of having keto flu. If you wind up experiencing cramps, which isn't a given, it can happen at any hour of the day or night.

You should note that several factors might also be the culprit behind your muscle cramps. These include but aren't limited to sitting for extended periods without physical movement, excessive caffeine intake, and working out but not drinking enough fluids to replenish lost sweat. When you do not move, your muscles can tighten up before seizing up. It is why standing up and walking around can be useful in dealing with or preventing a leg cramp known as a "charley horse."

Anyone that has been on this diet for an extended period can tell you about the often-dreaded keto fatigue. It is also known as keto flu, which is the handful of symptoms that set in with a dietary change. Once you make the keto plunge, you'll feel awesome for several days. However, by the third or fourth day, you'll start feeling pretty bad. It is the keto flu creeping in.

When you begin getting exhausted and suffer other symptoms, your body is signaling that your diet is working. It is your body making a move from burning off sugar for its energy to fat instead. The body starts to burn fat stores into ketones rather than using glucose. Once your glucose runs down, then your insulin levels drop correspondingly. It's also the time when your body begins letting a crucial electrolyte go, which is sodium.

If you have a good friend, trusted family member, or overly enthusiastic co-worker declaring how the keto diet is radically turning their life upside down for the better, they're probably selling you on the highlights without mentioning one specific thing. It is about how this particular nutritional regimen can bring with it excremental issues. Given the fact that this diet is high in fat and low in carbs, having bathroom trouble hits a lot of keto dieters.

You're likely to wind up with diarrhea, particularly if moving to the keto plan profoundly changed your eating and dietary habits. Anytime you seriously change the things you eat, it's possible for a reactionary GI system factor. If you continue having diarrhea, this particular food philosophy might not be your best choice.

Keto is a popular diet, and it's useful for many in losing weight while boosting their health. When followed correctly, it's a high-fat but low-carb diet that raises the ketone levels in your blood. It gives your cellular material a new source of fuel and offers you distinct health benefits.

Your body will undergo quite a few biological adaptations when you're on a ketogenic diet. These include more fat breakdown and lower levels of insulin. When this occurs, then your liver will begin the production of lots of ketones to give your brain energy.